Our good friend Bern Marcowitz (co-author of Care and Feeding of Books, and frequent contributor to BiblioUnbound) is fond of pointing out that the Torah & Bible both talk about eating books no less than five times.  In fact, he did a fun article on this subject a couple of years ago for Book Source Magazine, although I’m unable to find the exact issue at the moment.

Anyhow, this got me thinking about the recent books I’ve read (or in one case, started to read) – how would they taste?

A Most Wanted Man by John Le Carre

I think this one would be something like a good bowl of cream-sauce pasta served up at a real Italian restaurant (sorry, Olive Garden!).  Very tasty, smooth with LeCarre’s polished pace and simple prose.  But not quite leaving you with that satisfied fullness that makes you want to skip dessert (not to be mistaken with simply overeating!).  Maybe its the lack of resolution at the end of the story, how it seems to have a bit of existentialism grated on top.  Maybe its because the characters are kind of forgettable and a bit bland – kind of like that cream sauce before you spice it up with a little pepper and garlic.

Brood of the Witch Queen by Sax Rohmer 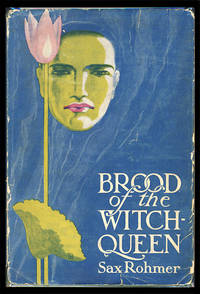 Tollhouse chocolate chip cookies.  Not an ounce of nutritional benefit.  Not really even that tasty – but you eat them because somebody happened to have bought them, and, well, they’re there.  And, in a kinetic sort of way, you enjoy them.  Once they’re gone, you totally forget the past, present, or future existance of them (seriously, nobody thinks about Tollhouse cookies, much less craves them) until someone finds a coupon for them and drags the box home.

This is the one I began, but put away a chapter or two in.  I’m going to call this one like eating Jello shots.  You only eat(?) them because a couple of your friends won’t shut up and leave you alone, so you sigh resignedly and down the blasted thing.  And, if you keep going, you’re going to end up giddy for a moment, then sick and hungover the next.  I quit doing Jello shots in college, and likewise, pop-fiction designed to be edgy and shocking for the sake of being, well, edgy and shocking.

Under the Andes by Rex Stout

McDonald’s fries?  Meaning, nearly indigestable and pumped full of more garbage then RJ Reynolds’ defense team.  And, its sad, too, because I really love Rex Stout’s Nero Wolfe books.  But, since it is Stout’s first book, it will be around for posterity – much like those fries will still be under the seat of your car long after we’re gone and cockroaches have taken over the top of the food chain.  At least those fries will be around for them to munch on while they read Under the Andes.

What can I say, G.K. Chesterton, always one of my favorites, is like some of the dishes my 9 year old likes to stir up.  It could be a frozen cheerios and peanut butter popsicle, chili with broccoli in it, or nearly anything with chocolate and honey poured on it.  But, somehow, despite how it turns your culinary expectations upside down, it always ends up being both fun and tasty (yes, the broccoli chili was actually quite good!).

The Girl with the Dragon Tattoo by Stieg Larsson

Finally, we come to a full on meal at a great French restaurant (I would say Swedish in homage of Stieg Larsson, but I’m not sure I’ve ever been to a Swedish restaurant).  You’ve got a great, juicy cut of intrigue as your main course.  With a full, Tolstoyan cast of characters, you’ve got side dishes of every kind within easy arms reach.  And we’re not talking a cast that’s made up of lima beans and rice.  This book has Character Development – anyone of its side dishes could be a main course unto itself.  And, Larsson has a point to telling his story, an underlying social commentary on violence against women.  So, this meal’s not only good, but you’re also enjoying a meaningful conversation over it.  And its a got a great, Montechristoesque ending, where the… nevermind, I’ll stop there.  Suffice to say, the after dinner drinks with this meal are nearly perfect.

How about you, what good books have you eaten recently?

About the author brendan

The original founder of Biblio.com, Brendan has a background in executive management, technical management, programming and database development in the publishing, high tech, and library industries. He is also a former "brick and mortar" and online bookseller, and has been in the book business for 12 years. Originally from Wyoming, Brendan is a "naturalized native" of Western North Carolina, having lived in the area for the better part of the past 30 years. He is married to his beautiful wife, Tracy, with two equally beautiful daughters, Sophia (aged 8) and Katherine (6). He enjoys reading history and modern literature, with favorite authors including Italo Calvino, Gabriel Garcia Marquez, Cormac McCarthy, Philip Roth, and Don Delillo.

This site uses Akismet to reduce spam. Learn how your comment data is processed.